THE CASE FOR A MARKET CRASH 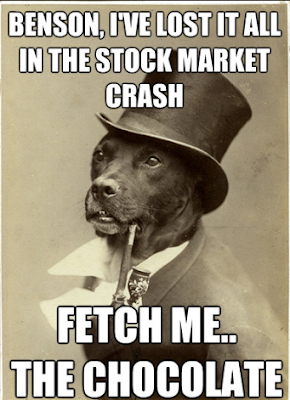 In order to have a crash, you need an “inflection point” … no, not some “fat
finger” idiot who got the comma wrong on the institutional SP500 futures order
to sell … a genuine moment in time where everybody says,
“sell Mortimer, sell!” … and right now, the only place I see that as a possibility,
is China. In essence, up ‘till now, all we’ve seen is bluster … good for the
yocals back home to see, but of no real value.

However, get the ChiComs to panic, which there is the possibility they might
do, and keep your eyes firmly planted on the offshore Reminbi rate, currently
at about 6.9300 to the Dollar [USDCNH] … wake up one fine morning and
overnight the Chicoms have devalued their currency by a whopping 5,000
PIPS to 7.5000+, and I can assure you stocks will be in for some major league
trouble, and it won’t matter what the “Plunge Protection Team” [PPT] wants
… cuz remember, they don’t sop up selling … they wait for the selling to be
over, and then they come in and bid it straight up … they’re not there to
“bail you out” … they’re there to punish the shit out of you for selling and
make you look like a fool for getting out … when the sell fuel is gone, they
step in and provide the buy fuel in tsunami like waves.

Again today, the news overnight is horrible for stocks … in theory … won’t
matter at all once the NYSE opens and the manipulators are in place … in the
present environment we’re in, bad news only means more opportunity to buy,
and almost at every NYSE open, stocks go north on spikes. Right now, solid
support is seen at the 2790 - 2800 level, with some light support at 2830-ish
… if the first one gives way on a close, there’s major “short gamma” trouble
brewing from the big option writers, and could see price go south fast.

As long as this level holds, though, buyers are going to be in control … and,
if we get above the 2890-ish level, and quickly go through 2900, you won’t
want to remain short either, cuz it could be explosive on the upside. So far,
nobody is really committing to either side … granted, on first glance we’re
not that close today to the 2800 level … but on the other hand, panic knows
no limits when you’re talking about the SP500 getting tanked … a lot can
change in a few hours … so far, a little selling as we go into the NYSE open in
about 1 ½ hours … all I know for sure, is that under the surface of a seemingly
calm and bullish market, there is panic waiting to be unleashed … that
“calm”, most definitely will change in the days and weeks ahead.

On a more technical level, yesterday we saw the SP500 successfully stay
above both its 100 Hour & 200 Hour MA … today, in short order, those
levels have given way in pre market trading, and have been broken to the
downside … whether they can stay below is another story altogether. As we
move towards the open, the question arises, do we see another NYSE open
where all we get are up spikes, followed later by down moves that take the
gains away, or do we get some selling? … the manipulators love the opening
of the cash market.

And as usually the case, banks start bidding the index higher about an hour
before the cash open, after they see the corporate buyback bids starting to
enter the order books, and more than likely talking to the “Plunge Protection
Team” [PPT] to take marching orders … seems like they forgot to email me
with instructions … I’ll have to send them my scorn for ignoring me. [snark]

And sure enough, the cash open sees a higher SP500 price … it’s the law
don’tchaknow … and just for shits & giggles, Turnkey’s LP’s feel the necessity
of widening the bid/offer spread again in the indexx, doubling it to 0.6 index
points … a fucking rip off if there ever was one … I’d complain to Turnkey,
but we all know they could care less … not a single valid reason for this other
than pure greed on the part of the LP’s … but hey, we already know they are
scum, so shit like this should be no surprise when they do it … 0.7 index points
now, cuz some FED Pie Hole says “no need to adjust rates further” … OK,
and the price balloons 5 points on panic buying, and then gets “monkey
hammered” … however, it moves me to the sidelines, cuz there’s no way in
hell I’m handing free money to the scumbag banks via a 0.7 index point
spread, that’s more than 100% higher than it was 2 hours ago … screw these
asshats … make an honest market or fucking go home.

Around Noon EST, and the Turnkey scumbag LP’s have slightly reduced the
SP500 bid/offer spread to 0.5 now, but that is still high … ask yourself, in a
market that is doing literally nothing why they feel the need to do this? … I
guess they figure they can’t hand out enough “slippage candy” for those
dumb enough to trade this shit today, and so they got some money they need
to raise … great, but not from me aholes. I don’t care who you are or what
biz your in, when you rip people off, they notice … and then where’s your
credibility? … these assclowns have ZERO.

Market meandering about in meaningless chop so far, as again today the
manipulators of stocks have stuck their thumbs into the dike and have
prevented a leaky selloff … can’t have drops in stocks during NYSE hours,
it’s a law now [snark]. And so here we sit in chop with zero to do but look and
shake our collective heads in amazement … and if by chance you like to be
short, imagine what happens when there’s good news, or if we get back over
2900 … look out above.

It’s after 1 PM EST, and what the hell can you do with something that won’t
move? … literally, we are stuck, with a slight downside bias to price … outside
the FED Pie Hole ramping the index up earlier, that got faded like a cheap suit
in sunshine, we haven’t done anything … there is no movement here as the
index is stuck around its 50, 100, & 200 Hour MA’s that are flat … how this
tug of war plays out the rest of the day, I have no clue. Now after 2 PM EST,
and quite frankly I don’t care what they do with this … man, this is a bucket
of pure bat guano … until tomorrow mi amigos … Onward & Upward!!