ANOTHER BIG PILE OF POO DAY 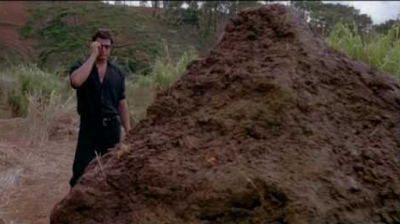 “Amazing, every time the FED meets, we get this afterwards!”

Oh, isn’t it glorious? … nothing says irony better than European bourses
closed today for international “May Day” celebrations … “yes, gather around
the Maypole, and join the festivities, as folks reminisce about the 200+ million
people killed over the last century, all for the glorious “people’s revolution”
… although, not apparently those that died … proof positive Europeans, on the
whole, are dumber than a box of rocks”. Just another trading day inside a
“Holiday atmosphere” [Dear Lord: I wanna puke!].

But, the stupidity of celebrating thugs, communists, anarchists, dictators, &
other assorted authoritarians, doesn’t stop there today, as once again the
“Oracles at the Eccles Building” blind us with bullshit starting at precisely
2 PM EST … and of course, markets will hang on every breathless word
spewing forth from the Pie Hole a/k/a Jeff Spicoli, who as chairman of the
Oracles, couldn’t get a job at fucking WalMart as a greeter, if judged on
merit. Remember, this is the outfit since their inception in 1913, that has
debased the purchasing power of the U.S. Dollar over 99% … continues to
flood markets with QE … and most importantly, has the CNTRL-P button
for the “Plunge Protection Team” [PPT], that overtly manipulates financial
markets for policy purposes … what a track record, huh?


Noon in New York, as we await to see what the clueless do at 2 PM EST, and
everywhere you look, besides oil, it’s a complete “shitshow circus” … again,
when you have tiny ranges, you’re going to get the “Flying Wedge of Death”
[FWD] to appear frequently … and why not, cuz it’s so easy to shove
anything a few points and get the lemming specs to bite, just like you want
them to. Anywhere else, this would be criminal.

And since it’s afternoon in New York, here comes the FWD in full force, now
that we’re hitting new lows for the day … “but, but, but Apple”! … and if the
FED comes in a little stingy in the dovishness, it’ll be lookout below come
2 PM EST … and for those of you wondering, yea this is why I sidestep shit
like this on FED days … it’s a complete “coin flip” crapshoot where nobody
but the scumbag LP’s win. “Are you not entertained”!


And to put a cherry on top of this FED cupcake, Turnkey goes dark right at
FED time for 4 minutes … “cuz you know, a “glitch” … how many fucking
“glitches” do you get a year before you realize this place can’t ever keep their
damn MT4 platform working … seriously, these guys piss me off to no end with
their constant bullshit of “we’re working on it & going to fix things”, and then
NEVER do”!

Well, now that I have a working platform back [cough, bullshit, cough], it
doesn’t appear the Twits have made any impression on anybody … a race to a
new high for buy stops got faded like a cheap suit in sunshine, and we’re back
down to where we were before Google messed up 2 days ago … now what?
How many FWD new highs & lows have we hit today so far? Twenty five
minutes after the report, and trading activity is dead … so, now looking to
Spicoli’s presser, who’s gonna panic first in NDX100 stocks, the longs or the
shorts?


“Well, that escalated quickly to the downside, didn’t it”? Seems Spicoli just
threw rate cuts overboard … and so Natch, the third new low for the day on
some sell stops … probably from those, that 45 minutes ago had the buy stops
hit off … and people sometimes wonder why these kind of days are to be
avoided? … wonder no more mi amigos.

So, onto tomorrow, where we’ll pick up trading … until tomorrow mi amigos
… Onward & Upward!!