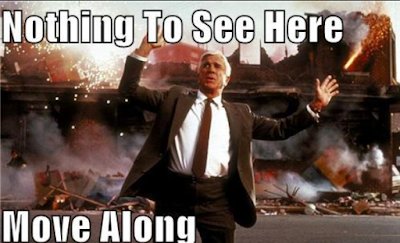 Some thoughts on yesterday’s midterm elections … 1) spineless, squish Repubs,
in the House, who initially dissed President Trump got crushed, 2) Hollywood
elites sure know how to waste money in Texas, 3) Florida is saved from being
Venezuela, 4) New Jersey loves corruption, 5) Minnesota believes the guy,
6) Taylor Swift should stick to music, 6) Ex Preezy Empty Suit really should
retire, and 7) Libtard Loons now running the House can play Student Council
for two years, while the WH & Senate completely ignore them. Bottom line,
though, is that unless Repubs are willing to stand up, like Trump, and push
back against globalism, socialism, and the “free shit army” warriors, the U.S.
has no future … it’s a clusterfark … “you voted for this upcoming circus
‘Murica, now deal with it”.

As far as markets are concerned, gold doesn’t know what to do … the “Great
Bullion Wall of Selling” is still intact [so far], between 1236 - 1242 … it looks to
me as though interest rates will go lower cuz of dismal prospects for economic
growth … the U.S. Dollar is offered … stocks stay range bound … gold is
supported … going forward into 2019, the wildcard is simply, “just how
fucking insane & wacky are the Loons running the House now gonna be? … I’d
bet on off the charts”.

Turning to today’s gold market … numerous attempts overnight to bust the
“Great Bullion Wall of Selling”, but to no avail … “eventually, I think it gives
way, but it’s gonna be a struggle … FED interest rate policy, due tomorrow, will
most likely support gold … we got “gridlock” coming folks, and that will support
price somewhat … I think the era of gold simply going down every week is over
for now … that doesn’t necessarily mean it goes up, but the underlying outlook is
more favorable than it’s been in a while”. Unless the clueless FED Twits do
something defined as “stupid shit”, like continuing to raise rates, I would
expect gold to be supported from a nasty sell off below 1200.

Overnight saw some very “whippy” trading action … as the election news
flowed in, the “Chuckleheads”, right along with Mrs. Wantanabe & Gal Pals,
jumped in, got flushed, tried again, got flushed again, and looking at the action
it was apparent the climb higher was indeed a struggle … and then Boom!
… the screwing of somebody’s buy stop, and the immediate pain of the
henceforth drop back down … “if I was cynical, I’d say the bullion dealers
intentionally set the buy stop off, only to sell it and “monkey hammer” the market
off a reversal high … nahhhh, they wouldn’t do that, would they”?

And once again, you can’t fight history … both the “Chuckleheads” & Mrs.
Wantanabe & Gal Pals get it wrong “bigly & yuge” … first they sell it off, then
they move it to the high … some chop … and then as we get about an hour
from New York … “well, thanks for playin’, please come again!” … and it’s
been down ever since. New York, with again a very pitiful range given the
political circumstances overnight … it isn’t even a market anymore, just
dealer led “chop” where if you trade it, you can’t escape.

Only one algo buy trade … PAMM up slightly.

“You just can’t get a lead on this stuff … and the spikes down are brutal in
scope”. And if you’re a second late getting out, you could be looking at 50 cents
to a dollar on the downside against you … really brutal trading conditions
from the bullion dealers. Now that the elections are out of the way, hopefully
we can get back to more normal conditions, which of course now is, taking
advantage of the “Chuckleheads” & Mrs. Wantanabe & Gal Pals in the Asian
session and into the early first part of the European session, where the action in
gold has been robust … it’s almost if there’s a market there! So, we should see
better results [a/k/a profitability] starting tonight and going forward.

COMMAND DECISION TIME!!
The response to the C2 options advisory signals, in GLD, has been great
… However, I’ve gotten a lot of emails from people who ask [paraphrasing
their thoughts], “hey -vegas, why don’t you do SPY [SP500] options in the same
advisory service as well? … it’s the largest by far, approximately 20 times the
GLD per day, and has an enormous open interest … 2 markets for the price of
one! … and since I trade both, I’d sign up, given the price is so low!
… whaddaya say”?

MY RESPONSE: “The “VEGAS GOLD TRADER” has now become, effective
today, the “VEGAS GLD/SPY OPTIONS” signal service”! You
asked for it, you got it! Now, you get 2 markets for the price of one, at the
same price!

And while my PAMM solely trades XAUUSD daily, the C2 options signals
service expands your trading opportunities, to the world’s largest & most
liquid options contract, the SP500 … “so, look for some trades in the near future
in SPY options … you have to be signed up to follow in real time, otherwise you
can only see closed trades … and, as a reminder, you get THREE [3] FREE
MONTHS of options signals, and after that it’s 60 frickin’ cents a day … the dog
is already signed up, but he’s doing “paw stands” he’s so frickin’ excited … option
signals details over in “Download Links”, and in the coming days I’ll have SPY
added to the “Information Tutorial” … seriously, whaddaya want from me for 2
quarters & a dime”?

PAMM Spreadsheet will be up tomorrow, and fully updated.