DEJA VU … ANOTHER “ONE & DONE” MUGGING 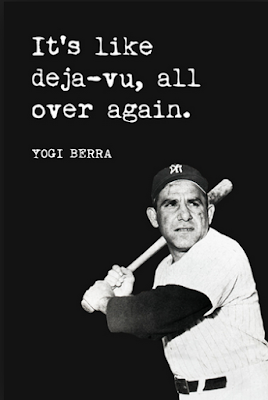 “The wisdom of Yogi!”

Well, that was exciting yesterday … for about 15 minutes … then it’s over, and
with heads & limbs severed from the shorts in the crowd, there isn’t another
buyer in sight … which of course, means it’s time for bullion dealers to take
over and slowly sell it off back down. Overnight, the Asian session got the call
from the law firm of “Zero, Zip, Zilch, & Nada, LLC”, and proceeded to do
absolutely nothing … Europe saw some light buying, and after taking out
yesterday’s high by a few pennies to set off buy stops from the shorting crowd,
it’s been a straight ticket back down … deja vu baby.

And so, what we’re left with, is what we’re always left with in gold … the
“Comex Con Game”, and the “one & done” nature of gold, which leaves
nothing but destruction in its path … “cuz the dirty little secret is, if you get
caught in this the wrong way, you’re fucking burnt toast with no way of making
the money back anytime soon”. For what seems to me like the 49th million
installment & iteration of “let’s fuck specs again” with zero follow through, you
can’t help but think that at some point, some of these people with staggering
losses, will simply leave and never come back … “sure, everybody has losing
trades, but to lose the same way again and again by dealer manipulation of price,
along with the guaranteed stop hunts, is something else again entirely … some
days, I marvel that a market still exists, given the level of “scumbaggery” &
bullshit Pol, Apparatchik, and general market abuses leveled daily”.

As yesterday so amply proves, again it’s the Apparatchik Spicoli [a/k/a FED
chief honcho Powell], that provides the spark that lights the fire, that makes
markets move for 15 minutes before it ends spectacularly in flames for gold
… EXIT QUESTIONS [that of course will never be asked by the MSM
financial press, but should be]: 1) did the bullion banks know ahead of time
your remarks, and 2) were said banks positioned for the “surprise” dovish
statements you made? Ask those questions, and you’ll never be invited back
to another FED presser ever again … softball questions please, nothing
“controversial” or intimating “scumbaggery” on the part of the holy & pure
banks or the FED … don’t believe me? … “go find Kathleen Hayes, former
CNBC infobabe, who gave a hard time to a FED governor once during an
interview, and next thing you know she’s outta the biz and a greeter at WalMart
to pay the bills … yea, it’s real”!

The New York session today, starts out with a bang … clean out sell stops, and
whip it around for the kill minutes later with the buy stops at the old high
… nothing major of course, we’re talking pennies here, but enough to trap
longs and then shorts … rinse, repeat, and once you orient your thinking into
this mode, it’s easy to see the “Comex Con Game” Eric Sprott has written
extensively about for some time.

Today’s gold market sees the same old shit, different day syndrome … no
volume, no liquidity, mystery ticks & spikes from hell that go nowhere, stop
hunts on both sides, and a market stuck in a $3 range for 7+ hours running
… other than that, everything is fine. “Just another “one & done”, thanks for
playing & contributing, and come back again real soon, Ok”? Mid morning in
New York, and the “Comex Con Game” is in full effect.

Want an example? … well, directly below a closer look at XAUUSD on the M1,
with bullion dealer “scumbaggery” in full effect … first the sell stops to clean
out longs, then the buy stops to clean out shorts and get you long again,
followed by the appropriate “Thelma & Louise” ride to the bottom of the
quarry … “hey, it only hurts when you hit the bottom”! Add it all up, and
you’ve been screwed twice and the market hasn’t gone anywhere or done
anything.

And when you have tight ranges, non-existent volume and even lower liquidity,
this is what you can expect, which is why I’m on the sidelines during this
clusterfark cuz I don’t want to get caught in the dealer bullshit stop hunts, that
I know from experience they’re gonna pull, when Mr.. Jack Squat is around
and nothing is happening … bullion dealers will make shit happen, only it isn’t
gonna be to your benefit and profit. The tighter the ranges, the more this kind
of FUUBAR trading scenario has a high probability of being seen … bullion
dealers got to make their money somehow, some way, and if volumes are low
they resort to shit like this almost without fail … why would today be any
different?

This wouldn’t even be an issue if the market had a decent trade flow
… unfortunately at present, this is a sick market that only sees any kind of
range when there’s news that affects interest rates and/or USDCNH … other
than that, it’s a bucket of shit … and today is a bucket of shit playing out right
before your eyes if you’re watching it.

All told, it’s been a $3 - $3 ½ dollar range for the last 12+ hours, with more
than a bushel basket filled with bullion dealer “scumbaggery” of great
magnitude … WTF is anybody to do in this but lose money? … you risk dollars
to make pennies, and that’s assuming 1) they behave while your in [a big if],
2) stop hunts aren’t set off, and 3) the slippage is reasonable … any one of these
miss, and your on the negative side of the equation with nowhere to run and
make it back … the only thing that makes sense is to “sit on your hands” and
refuse to be played.

No trades today in the PAMM or C2 options signals advisory.

Maybe the FOMC minutes due out at 2 PM EST makes a difference, but that
comes way too late in the day unless you like the “pain trade”. Just nothing to
do today but observe a market that is going nowhere and doing nothing. Like
I said; “no volume, less liquidity, & dealer “scumbaggery” = me on the
sidelines … not enough volatility to get legit algorithm signals, and the market
does nothing but drift".

And just to put a cherry on top of this total clusterfark of a day, gold has puked
violently on sell stops, down to the 1222 level before bouncing … “how many
times today have we seen this bullshit? …. at least 4 that I’m aware of … like I
said, they got to make some bucks some way if volumes don’t support the cash
register … criminal comes to mind, but that only happens in fantasy land … WTF
is all I can say while shaking my head, glad I’m not in this bullion dealer induced
bullshit hell”.

Onto tomorrow … while I generally think this shift in interest rate policy is
supportive of gold, there’s massive resistance at the 1230 - 1236 level, followed
quickly by the top of the last few months at 1243 … up and until the Trump / Xi
“lovefest” is over and done with at the G20 this Saturday, and then the FED
interest rate decision in mid December, it’s gonna be a tall order to see gold
vault higher without some earth shattering news to support the move … until
then it looks and feels like chop to me … we’ll see what happens.

PAMM Spreadsheet will be back up very soon