SOMEBODY IS GONNA GET HURT TOMORROW 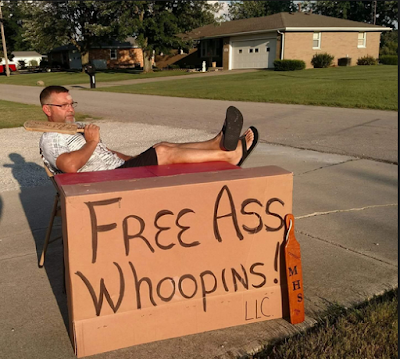 “He’ll have plenty of business tomorrow at 2 PM EST!”

For the last 6 days, the Asia & Europe sessions have done nothing but buy,
buy, and then buy some more … and every day New York either moves
sideways or goes lower after their buying … it seems pretty clear to me the
banks are loading up on the short side of gold futures and the public [again]
is long … way too long … and so, more than likely tomorrow sees a gigantic
ass whoopin’ where specs get blindsided and forced to puke lower. “Hey,
maybe I’m wrong, but somebody is holding gold down in New York, and I don’t
think it’s “Ma & Pa” out in Des Moines, Iowa doing it … the other factor here,
is that the banks already know what the FED is gonna do, and to think otherwise
is to be naive & foolish … you think the FED is gonna blindside JPM & Squid?
… hahaha, that’s a good one”!

Cuz in modern day manipulation theory, the banks will be buying on the way
down, and can tell regulators that the sell off can’t possibly be their fault cuz
they were buying … they will say that they actually helped maintain market
liquidity and lessened the decline by their buying … “of course, what they
aren’t admitting is that they had inside information all along and knew the
outcome of the FED meeting before the market knew, and spent the days
preceding the FED meeting selling the shit out of gold and loading up on short
positions … where the hell do you think all these Twits at the FED end up after
their stints at “public service” [hang on while I puke … Ok, I’m good now] are
over? … and so the game goes, and everybody pretends it isn’t that way, but it
sure as hell is … and when the regulators pull themselves away from their
computer screens from watching midget porn all day [see IG report from the
Obama regime], they’ll buy the banks argument, and everything neatly goes
away … rinse, repeat, and life goes on as always in gold”.

Only if ALL the buying the last 6 days were the ChiComs, looking to take
delivery in the Far East futures exchanges, does the manipulation equation
change via the “ChiCom Hustle” … if that indeed was the case, and the FED
ends up being dovish, an explosion to the upside is possible … and this
becomes believable if you assume the ChiComs know what the FED is gonna
do … “hell, the only ones that don’t know are us, the specs, and the ones they
could care less about”!

We will find out a lot about the current state of the gold market tomorrow at
2 PM EST … my gut feel, is that the Chicoms don’t do anything without
prior advance knowledge, so for them to be heavy buyers, they have to know
for certain that the FED is gonna be dovish and send gold higher … if not,
they’re aren’t buying … they may be Communists, but they ain’t stupid like
specs … on the other hand, if the ChiComs are indeed AWOL from the
market right now, then it’s gonna be a one second slaughter on the downside,
as long specs get in line for the expected ass whoopin’ that is to come … cuz
the one thing you can ALWAYS COUNT ON IN GOLD, is that the banks win
and collectively the specs lose. Tomorrow is going to show us who’s in charge
of this market, the ChiComs or the scumbag banks.

Today’s market another “shitshow circus” of manipulation … as I said
earlier, 6 days in a row of nothing but buying out of Asia & Europe, so where
are we in terms of price from 6 days ago? … we’re at the same place we were
at on March 13th, right around the 1306 - 1308 level … it’s about NOON in
New York, and so far we got a $4 range, and of course the “Flying Wedge of
Death” [FWD] working overtime to insure there’s no momentum going
anywhere … only a constant cavalcade of bullshit trapping longs / shorts in
alternating sequences sure to create heartburn in specs hoping to capture a
little “MoMo” and bank some coin … cuz whatever happens and it takes 30
minutes to achieve, gets undone in 3 or 4 minutes on some kind of blitz from
the banks.

So, here we are drifting in a tight range, with zero going on in terms of
volumes and/or liquidity … as the trap is being set as I write for tomorrow,
when a whole shipload of people are gonna get hurt in seconds … this is
bullshit, but then again this is gold, so in the minds of the Elites, it’s OK.
There simply is nothing to do in this shit when it gets like this, especially
when Asia goes full retard long on a buying spree almost every day … cuz
it’s simply a fact of history, and that history says whatever Asia does, 90%+
of the time New York finds a way to unwind … somehow, some way they
get ‘r done! And yet, they keep getting long, and then watching it go lower in
New York … unreal but true.

I don’t really like sitting here watching this and sitting on the sidelines … but
I don’t like losing money either, and in tight ranges with very low intraday
volatility, there are simply no algorithm buy signals to take cuz there aren’t
any … zip, zero, zilch, & nada … so we sit and wait cuz it’s all you can do
given the circumstances, and the way gold has been trading lately … pathetic
but reality nonetheless.

Tomorrow looks to be completely dead to the 2 PM EST interest rate decision
by the FED … lately, gold has moved into the report, acting as if somebody
knows something the rest of us don’t [nah, conspiracy theory stuff, can’t be
true right? …. Bwahahaha], so it looks to be a crazy ass afternoon tomorrow.
One more thing … full moon tomorrow PLUS a FED meeting … “yea, so the
markets got that goin’ for it”!

Let’s see what happens, but right now I’m leaning towards gold getting
smashed on a more hawkish FED statement, while not coincidentally banks
are short and specs are long … it will get interesting … until tomorrow mi
amigos … Onward & Upward!!