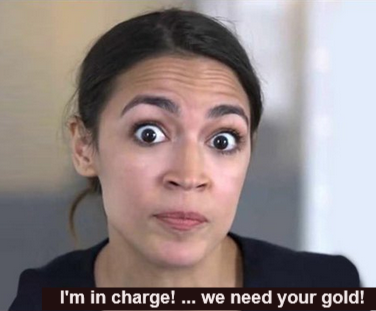 “Pompous little Twit”! … Well now, those aren’t my words to describe
Occasional Cortex, the Libtard media’s new darling “It” girl from tinfoil
New York …  nope, they’re from the co-founder of “Greenpeace”, another
Dinosaur Libtard group that’s been around a while to help save Mommy
Earth from evil humans, but has fallen on hard times lately cuz they ain’t
“woke” enough … enter stage left, the new crusaders straight from the throne
of God himself, self anointed by themselves with the highest moral authority
ever seen, the lowest IQ’s ever seen, but the most hubris ever seen.

Cuz when even the receptive “tinfoil hat” crowd says you’re nuts, maybe you
should take a look into a mirror and confront the enemy there … however,
while she certainly brings LOL to a boring news day, never forget her
Socialist, Communist, Authoritarian [Mao, Stalin, etc., the usual suspects]
mindset, and what her and her ilk plan on bringing to your doorstep if they
ever do indeed get power … “and if that day ever comes, and it might given the
nature of the dumbed down Sheeple inhabiting the U.S. at present, who think
“free shit” is their entitlement, and vote for Noobs like her, besides your
freedoms you can say “buh bye” to your wealth, including first and foremost
your gold & silver … “barbarous relics of capitalist evil doers, trying to preserve
private wealth while the masses struggle”! … after the beatdown and
confiscation, which FEMA camp would you like to be reeducated in and reside
until you get your mind right”?

So, while you still have a chance, begin stacking metal “offshore” where our
Socialist “It” girl, along with her loser crowd of misfits, can’t get their
grubby little hands on your gold, silver, platinum, and/or palladium … “trust
me, it’ll be one of the first things that will get confiscated cuz they need the
money to build their Socialist Utopia” … which is why, you can easily sign up
at BullionStar in Singapore and begin to protect yourself against government
… “it’s better to be 10 years too early, than one day too late”!

New York starts the day with an almost $12 range … from an historical
perspective, this isn’t good … usually that means a very dull, listless, chop
kind of day … Asia did almost nothing, and it was Europe that sold gold off,
after a very feeble rally attempt failed early on … nothing else is moving
anywhere, so the metals are an island so far … now, what do the scumbag
bullion dealers in New York do? … if we can get a spike low that recovers
quickly, it most likely means a short term bottom, but what is necessary is
follow through, and not see it roll over and die back to the bottom … we’ll
see what happens.

So far, around the NYSE open, gold is spiking up off of attempted long
liquidations … scumbag bullion dealers are buying and covering shorts on
those moves lower, and the turnaround off these marginal bottoms is quick
& vicious … look for this the entire day.

We’re seeing a definite pickup in trading activity, a welcome chain of events
even if gold has gotten “monkey hammered” in the last couple of days
… we’re starting to see better trade flow … let’s just hope it lasts.

Afternoon in New York, and who knows what the scumbag bullion dealers
got planned for this afternoon … what ruined today for a good rally was last
night’s open, and what we need to see is BOTH asia & Europe try and take
gold lower, although we may be getting very near a short term bottom. We
are getting zero help from other markets today, where they are just sitting,
except oil which is in its own little universe of psychotic dreams … “I here oil
is so bad, God got stopped out on a sell before they reversed it on Him … so just
sayin’ the action there is bewildering to say the least”.

One algorithm buy signal today … PAMM up just a hair short of 0.2%.

The signal was decent, but almost immediately the market spiked higher, and
you know what spikes up mean if you’re long … got a decent, not spectacular,
fill in liquidating … if you wait for the turn lower you’re toast, and it’s the
only way to get a fair fill from these scumbags.