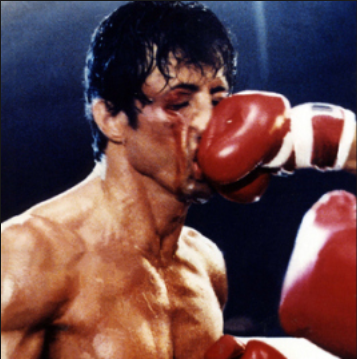 “What happens when you go home long in a bear market!”

“Well, that certainly escalated quickly to the downside, didn’t it”? All the more
striking in view of yesterday afternoon’s Bloomberg headline that attempted
to “rescue” stocks with a non-story story about Amazon. Today sees China
come back with additional tariffs on U.S. products, that here some 3 hours
until the NYSE open sees the DOW30 down about 550 points … a daily range
so far today of almost 600 points. And there you have it … all the voodoo in
the world to get the indices back above their respective 200 day MA’s, shot to
hell by China. EXIT QUESTION: “Did China’s ruling elite sell SP500 futures
late yesterday, knowing this was coming hours later, and are now covering as the
news breaks of the tariffs”? [Hint: Of course they did, they’re Communists!]

Well, this is gonna ruffle some panties when the U.S. opens, and it will be
interesting to see if there is indeed some kind of panic meltdown on the NYSE
open. And as I said yesterday, according to Nomura, if the cash SP500 gets
below 2535, there’s about $100 billion in stocks that need to be sold … like
right now … “gosh, what could possibly go wrong here”? Be aware, though, the
“Plunge Protection Team” [PPT] is on “DEFCON 1”, and if they show up after
any selling wave, the ride up will be be quick and nasty.

Might as well get this out of the way now, cuz it’s the main reason I have done
no trades in the European session … yet again, our daily dose of scumbag LP
bank’s “jacking” the DOW30 spread, simply cuz they can … directly below in
all its manifest glory to the assholes that call themselves liquidity providers [an
oxymoron if there ever was one], the first before the market opens, and the
second my order box about a half hour into the NYSE session. {Note: It went
to 10, down to 2, and then back to 8 … “I guess I’m supposed to be grateful cuz
they do such a wonderful job at being liquidity providers? … if Vito Corleone
knew in his day about this white collar crime, he most assuredly would have
moved the entire mob into trading”.] 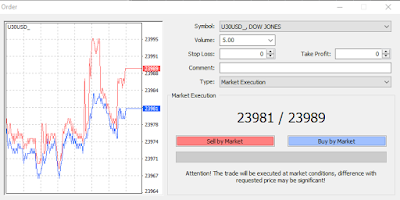 And even though I would love to trade after Europe opens, I’m not gonna
hand out money to thieves, just to make a trade … cuz if the trade turns sour,
they got me over a barrel and I’m paying Vito Corleone to get me out.

ADP numbers out … strong, but I don’t think it matters given the
politics/trade war meme gripping the market right now … question is, what
comes next? More tariffs against China or what? And with one tweet,
President Trump can either send the DOW30 soaring or plunging.

Turning to today’s market … set your rally clocks, here come the Chipmunks
at the open with their 100 point DOW30 ramp in the first 5 minutes of trading
… “what a bunch of morons … any of you that put money into passive ETF’s
and/or ETN’s that track the DOW30 or the SP500, these are the assclowns that
are filling your buys every day, right at the then high of the day”.

“Well, that escalated quickly to the upside, didn’t it”? And once again, shorts
fight the tape of history … according to ZH, the 600+ point rally since the lows
is directly attributable to … ready for it … Larry Kudlow? “OK, enjoy that
kool-aid kids” ...how about the PPT showing up in force, and sending dumb ass
Larry out to cover with inane comments telling investors “not to panic” over
trade wars? “Seriously, anybody that believes he is the reason for the rally needs
professional help”.

And now that they’ve brought the market back 600+ points from the 12
minute almost 600 point decline at 4:00 A.M., what the hell happens next?
I’ll repeat what I said yesterday, “where is the buy fuel gonna come from, now
that everybody and their brother is either long or covered painful shorts”? With
what’s going on everyday, come this afternoon you think longs are just gonna
sit complacently by if this stuff rolls over and the selling starts anew?

And I will repeat again, for those that need some enlightenment, trading is not
about profits per se, it’s about sidestepping Tony Soprano & crew and
avoiding the landfill … and what we are seeing every day are swings, that if you
get caught on the wrong side, are simply “killers” … this is why “setups” are so
important, and why I harp on them like I do, cuz it’s the reason over my career
why I’ve made millions … otherwise, you’re stuck trading off Larry Kudlow
rumors [God help you], or other some such bat guano.

And as we head toward mid-afternoon, the market is indeed rolling over, and
is starting to show the first real breaking action of the day outside of 4:00 - 4:12
A.M., when the China tariff news hit regarding soybeans [the critical
commodity in the tariff news] … maybe it recovers, and maybe it doesn’t
… don’t care quite frankly, cuz now that we’re in the afternoon of New York,
anything can happen within 5 minutes … 100+ up, 100+ down, or both, and
nobody wants to get “monkey hammered” with the clock winding down on the
day, and traders everywhere panicking to make points to get back to even and
simply can’t and won’t get the moves to make that happen.

“Setups” very hard to find today, in the classic sense, and both trades took
advantage of buy stops above the market to liquidate at favorable prices
… “remember, when resistance breaks to the upside, it’s not a place to buy, but to
liquidate longs … their panic “buy fuel” is what pops price higher and gets us the
best fills from the scumbag LP banks”.

And I will reiterate again what I wrote in the “DOW30 Aggressive Scalper
Tutorial” about M1 engulfing patterns in a “high volatile environment” like we
have now; “don’t make the trade, cuz way too many of them are “one hit
wonders” and immediately get faded by sell pressure, and you end up buying the
top of the M1 with no place to go but down … you have to wait for “The Teacup
Handle Turn” [THT] in some form or variation, for the simple reason you need
some modicum of support below the market to help propel price higher from
panicked shorts… without that, you’re toast, cuz that one M1 with the bullish
engulfing pattern isn’t enough on its own to do the job”.

“Well, has everyone enjoyed the Larry Kudlow melt up? … the new poster boy of
the PPT, no doubt”! … now that we’ve made the 1.300+ point swing in the last
10 hours or so, it’s important to remember not to give a crap about the price of
anything you trade. Doesn’t matter if you trade dirt futures … all that matters
is that it’s your own personal ATM, and if you treat it like that, with a strict
risk control regimen, and use the “setups” I’ve outlined in the documents I’ve
published, there isn’t any limit to what you can make from markets … how do
I know? … cuz I’m living proof.

Last hour of trading and conditions, while crazy the entire day, have taken a
ratchet up, and now it’s a total flip of a coin whether the next 10 seconds sees
the DOW30 up or down [or both] 30+ points, with turns that are vicious in
their scope. EXIT QUESTION: “I’m wondering what’s going through the mind
[what’s left of it] of the guy who sold the 65,000 lot of e-mini SP500 futures
earlier in the week some 70+ handles lower, and if this rally this afternoon has
anything to do with him puking”?

In any event, another profitable day … tomorrow’s another day of opportunity
… I’m outta here … until tomorrow mi amigos … Onward & Upward!!