ONE UGLY DAY FOR MARKETS ALL AROUND 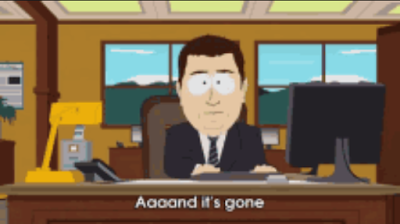 “Well, in gold, that escalated quickly to the downside didn’t it!?”

Markets have got some serious mental issues … viz., they’re run by central
banks, move nowhere without permission, and then either die or go total bat
shit crazy … if trading markets were your kids, you’d have them committed
and never released.

I’ve said for ages, gold is a completely “asymmetric” market, where bull runs
aren’t anything like the bear raids … today seeing, the entire week’s up move
get obliterated within a few hours. Round up the usual suspects from the
“Rally Protection Team” [RPT], and it’s look out below. What a bunch of shit,
but as I’ve also stated previously, there isn’t any way possible for gold to rally
up past 1350, unless we get some kind of debt crisis and/or dollar crisis going
on, and from the looks of the economic corpses of Japan, the Eurozone, the
U.K., and China, we aren’t there yet. Until you start to see the dollar get really
hit, plan on gold sub 1350, and the way things look today, it looks once again
like 1280 is gonna be under attack going forward … if that gives, look out
below.


Cable on the other hand … did the Queen declare a holiday today? … just
checking, cuz today sees one of the worst trading days in my memory in
GBPUSD … what’s anybody to do with an effective range of about 25 PIPS
over 9+ hours? … and the daily chart sees further compacting of price in the
sedge its built over the last month … traders sick & tired of the comedy show
“Brexit”, and simply walking away from Cable today … what a shitshow.

So, gold gets what gold usually gets when the banks say “enough” … and
they aren’t shy about clubbing the shit out of price quickly … Cable simply
dies. Nothing really left to say about it … onto tomorrow mi amigos
… Onward & Upward!!