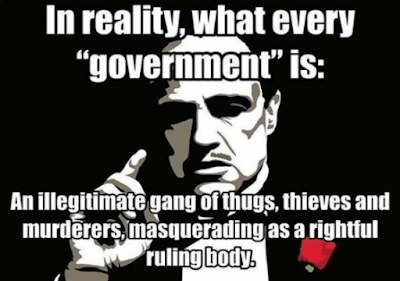 “Words of wisdom from Vito Corleone … nowhere more so than gold!”

The bullshit that goes on in gold, with the “wink, wink … nod, nod”
acquiescence of the corrupt CME, FED, BIS, & other central banks, isn’t
even a secret anymore … hell, they don’t even hide the corruption anymore,
simply choosing to stick their noses in the air and refuse to answer any and
all questions posed to them, as well as stonewall any and all attempts to find
the truth. However, criminal proceedings & civil lawsuits slowly bring out
the facts.

Directly below, is a link to the latest news regarding the corrupt gold market,
from our friends at GATA [Gold Anti Trust Action Committee], who are the
only ones keeping track of all the horseshit shenanigans perpetrated on the
trading public.


There’s a lot in this months edition, but one item specifically caught my eye,
that should bother the shit out of anybody trading gold … and that’s the role
of the shadowy, corrupt BIS [Bank of International Settlements], based in
Switzerland [of course, where else would it be?], who like to think of
themselves as the central bankers bank. They “borrowed” 56 tonnes of gold in
February 2019, while at the same time the NYSE ETF GLD, loaned out or
“leased” 57 tonnes of gold for interest … “what a coincidence, huh”? And
what happened in February? Directly below, the XAUUSD daily candlestick
chart with commentary.

Two things to note here; 1) if you happen to own the ETF stock GLD, how
do you feel about your fund manager leasing gold out YOUR PHYSICAL
GOLD for interest? … not happy about it? … tough toenails Skippy, they
did it anyway, which is a big middle finger right in your face, and 2) where
else do you go to get your hands on physical gold in a quantity like 56 tonnes?
… Home Depot? … WalMart? … how about the world’s largest holder, which
is the ETF GLD, outside of a central bank of physical gold … well, isn’t that
fucking easy?

And they take the gold and sell the shit out of it, knowing full well at the
bottom they can buy it back for pennies on the dollar, usually from the same
people they sold it to days before … nice work if you can get it. And if this
isn’t enough evidence for you to realize what people are up against in
financial markets, then you are simply delusional. “Each and every day, it’s
not a battle against other players, known as the “market” … OMG!, if it was
only that simple … NO, it’s a never ending battle against scumbag manipulators
known as bullion dealers and central banks … evil almost never looks like evil
on the surface, cuz the purpose of evil is to deceive, not threaten … these banker
scum are the source and continuing problem of the modern world, and their
machinations in everything traded, as well as politics, has got to at some point be
eradicated … if it isn’t we’re all doomed to a life of serfdom … how can I make
it any clearer than that”?!

Asia & Europe no help today, as they’ve decided to go on strike from gold
… who can blame them really? … at the start of New York trading, we got a
$3 & change range … which only means the New York scumbag bullion
dealer banks will have their way with gold today, and anything is possible
depending on their positioning … we start the day with a tiny rally hitting a
new high, thus bringing in buy stops, which they know they can count on, and
like last time, they’ve had over 3 full days to cover shorts down here … roll
the pet yellow rock back up the hill? … we’ll see shortly.

“Just when you thought gold trading couldn’t possibly get any worse than the
last 3 days of this nothingburger, along comes today and takes the cake
… seriously, is this market sick or what”? … barely able to manage a $6 range
with a slew of market moving reports, what we get instead is the “Flying
Wedge of Death” [FWD], with mystery ticks galore and spikes up/down from
hell all over the place … only one small problem … gold isn’t moving
anywhere … Mr. Jack Squat has moved in and he’s not budging!

Afternoon, and words escape me … adjectives are not reflective of how bad
this crap is … only people who win are the scumbag bullion dealers, no way
else to put it. “I want to trade it folks, but there isn’t anything to do but get
trapped by the dealers and puke … there literally is nothing in this market,
volume & liquidity wise, and there hasn’t been anything going on 4 to 5 days
now … all that’s left is to wait it out”.

Over in Cable land, proof positive Pols are the biggest scumbags in the world,
yes even surpassing the bullion dealers … for its part GBPUSD has held
together rather well, although the trading action is psychotic when the ever
present “Brexit” horseshit surfaces from the usual suspects … “trading it
now is like walking naked through a rose garden, blindfolded and spun around,
and then set you on your way … good luck with the thorns Skippy”! … well hell,
if I wanted that, I’d just close my eyes and get mauled in gold … we’re getting
close to trade GBPUSD, but we need a lot of this drama out of the way first.


Onto tomorrow, where I don’t know if it can get worse than today, but I’m
pretty sure gold will do its best to try … I’m outta here … until tomorrow mi
amigos … Onward & Upward!!