THIS IS FX: SO MUCH FOR “FLYING PIGS” 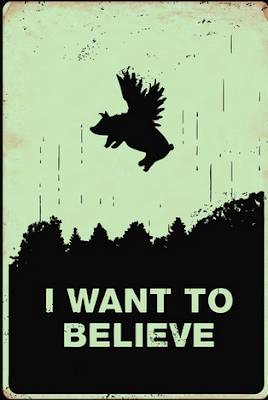 “No Skippy, it’s not a flying pig … it’s somebody long EURUSD!”

"Well, that escalated quickly to the downside, didn’t it”? Here’s the critical question: “why now, why today”?

First some historical perspective; in the early days of FX trading in the futures markets [mid 1970’s to mid-1980’s], central banks tried to influence FX markets with literal intervention. They’d come in, and “monkey hammer” some FX market by 150 – 200 PIPS in under a minute, and use central bank reserves to do it; the markets response? “Hey thanks dumb asses, I needed a break to get long!”, and 2 hours later, that specific FX market would not only make the 200 PIPS back, but would be another 100 PIPS higher!

Well, central banker Twits may be stupid, but they’re not dumb … over the years they learned from their mistakes, and squandering their reserves on interventions that didn’t work. What did they learn?

They learned that they needed to wait until the market got in a technical position for some long liquidation, and THEN trot out the usual suspects in the financial MSM, along with Apparatchik Pie Holes from the central bank; and those voices suddenly found an audience from those that days earlier couldn’t or didn’t want to listen … and the race to the downside was on! And they learned they got exactly what they wanted without spending money … they got a receptive audience in the market, cuz everybody and their brother were long, and when they hit the airwaves or print media, all hell broke loose on the downside … “so, under the right circumstances, bullshit does work after all”!

Fast forward to today, where the daily candlestick charts aren’t exactly bullish after 2 straight days of high rejections in EURUSD … given the fact that the CFTC’s latest COT [Commitment of Traders] shows “record-er-er-er” spec long positions, and all it takes is for somebody with a very large account to start taking profits first, and here comes the ECB Pie Holes all over the place. “Why, if I was a cynic, I’d think the whole thing was coordinated between the scumbag LP banks & the ECB, against a “slew” of retail & institutional specs who are long and praying for any kind of rally to sell … well, that pig flied on Friday”!

So, it shouldn’t come as a surprise after the massive runup, that they’re gonna go to the “central bank playbook” and try and inflict as much pain on retail specs as they possibly can … the only thing we don’t know is exactly when they do it … that they are gonna do it, is a given in my book. So, when I talk about “situational awareness”, this is just another part of the process in FX, and why it’s important you understand how FX works, how the scumbag LP banks are most definitely NOT your friend, and how central bankers in their collective dreams only wish for your account’s demise!

Turning to today’s trading … the road down was a brutal process, but the thing I focused on was the lack of good “UP” spikes versus the number and scope of the “DOWN” spikes … the latter had control of the market, and this told me that scalps from the long side had to be scalps … the probability of this stuff rallying strong today had to be in single digits … that meant, the algorithm signals, most likely, would be too slow, and that “The Teacup Handle Turn” was the key to profits today … and while my trades were profitable, the lack of any kind of real “thrust” on the upside, had me concerned; simply put, they weren’t going up very fast, and met resistance every step of the way … and then BOOM! … and down she goes, with 2 or 3 M1’s taking out 20 – 30 minutes of upside action that had just past. Understand, this isn’t bullish for price!

I had 2 trades today … PAMM is up between 0.1% - 0.2% today … entry prices were good, with no slippage, and my liquidations could have been slightly better, but in this environment, I choose caution over greed.

The market [EURUSD] today feels “heavy” … and while I wrote on Friday that I expected today or Tuesday, at the latest, to see some kind of long liquidation, I didn’t see it going this deep, without much in the way of rallying. This makes me think, that if Asia can go lower, the stops below today’s low will see sell stops … and that most likely will be the low for the rest of the week [maybe … haha].

As always, though, what I “think” [the dog is barking saying, “please don’t go there”!] doesn’t matter; we take each day, each trade as it comes via the “setup” … and as we all should know by now, the “setup” is the only thing that matters for consistent profit. Onward & Upward!!

OUR TURNKEY FOREX “PAMM/MAM” IS NOW OPEN AND OPERATIONAL; SEE “PAMM/MAM MONEY PROGRAM” IN “DOWNLOAD LINKS” SECTION IN RIGHT HAND COLUMN FOR DETAILS [VIEW ONLINE AND/OR DOWNLOAD] AND START YOUR JOURNEY FROM WHERE YOU ARE AT TO “ESCAPE TO SUCCESS”!