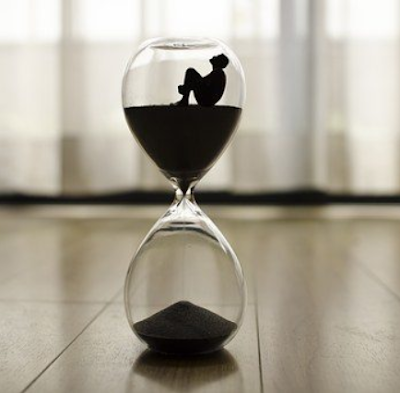 “Sure, keep telling yourself everything is OK … what can possibly go wrong!?”

In The Holy Bible, Book of Daniel, Chapter 5, it is recounted how Belshazzar,
now King of the Babylonian empire, holds a great feast and drinks from the
vessels that had been looted in the destruction of the First Temple. A hand
appears and writes on the wall. The terrified Belshazzar calls for his wise men,
but they are unable to read the writing. The Queen advises him to send for
Daniel, renowned for his wisdom. Daniel reminds Belshazzar that his father
Nebuchadnezzar, when he became outwardly arrogant towards God, was
thrown down until he learned that He has sovereignty over the kingdom of
men. Belshazzar had likewise blasphemed God, and so God sent this hand.
Daniel then reads the message and interprets it: God has numbered
Belshazzar's days, he has been weighed and found wanting, and his kingdom
will be given to the Medes and the Persians. “That very night Belshazzar the
Chaldean (Babylonian) king was killed, and Darius the Mede received the
kingdom” … Daniel, 5:30 - 31.

And so here we are, and you sit comfortably in your house, and by all
outward appearances, all is merrymaking and fine … “and I’m here today to
tell you it ain’t”! … one honest look around what’s happening in the U.S.
today, both socially, politically, and economically, should send horror racing
through your mind … from the immoral “Twitter mobs” crowning themselves
morally superior, to the absolute idiocy of delusional radical Socialists like
“Occasional Cortex”, and her Green New Deal, to the Multi-Trillion dollar
deficits being currently run everywhere on the planet, from Japan to Europe
to the U.S., I’m here to tell you your money & wealth is under assault like
never before … right now, the Communists have control of the House … if
they ever get control of the Senate & WH again, it’s O.V.E.R. for your money
and way of life.

Unless you want to continue to put your head in the sand and pretend, every
cultural norm of decency & propriety is being destroyed in front of your eyes,
right along with QE, inflation, and destruction of your wealth that is
unprecedented in history. “And like the proverbial handwriting on the wall, it’s
there for all to see if you open your fucking eyes and see it … get your money &
wealth outside of the U.S. before it’s too late!! … cuz I got news for you “bigly
& yuge” … the next “DEM” [meaning Communist, Marxist, radical Socialist]
to get the WH, and you’re nothing but a target … crushing taxes, confiscation
of wealth, and capital controls will be the norm … it’s better to be 10 years too
early than 1 day too late”!

These asshats in government simply continue to invent new ways to fuck
ordinary people …. New Jersey, after sending a corrupt Senator back for
another term last election, cuz I guess fucking underage teenage Dominican
Republic hookers is OK now, send the same old socialist asshats back to the
statehouse, where they now have decided to tax … wait for it … RAIN! … yes,
a “rain tax” is now in place in New Jersey … “you idiots asked for it, now you
got it … STFU and sit down, I got no sympathy for any of you living in N.J.”!

Upon any amount of reflection, it’s amazing gold isn’t already at $10,000 per
Oz. … you can thank the sell side manipulators, most notably JPM & HSBC,
who on behalf of government hold a substantial majority of short metals
futures positions on the books … enter the ChiComs, where their passion for
the physical knows no bounds, simply cuz they fully intend to back the Yuan
at some point with gold … “and at that exact moment, the U.S. Dollar goes
“poof”, right down the shithole … right along with oil priced and paid for in
Dollars … say goodnight … socialism is great until you run out of other people’s
money to borrow, and who’s gonna want worthless U.S. paper then”? Wait until
then to get your house in order, and you’ll be in great company, right along
with the likes of Belshazzar … it happens in the blink of an eye, much faster
than you can imagine … get up off your ass and do something about it before
it’s too late.

Gold needs to “back & fill” up here at these levels above 1330 … my fear is that
if we take out 1350 and continue to go North, the banks will see to it, some kind
of “bigly & yuge” reversal day on the daily charts, where every $2 analyst
outside of North Korea will pronounce the up move dead in its tracks, setting
up some ugly action on the downside for those positioned long … to prevent
this, steady as she goes higher is what you want to see, with corrections along
the way … any kind of parabolic move up, and this shit is in trouble when it’s
done pulling in every last dime of retail spec money.

Today is FOMC minutes day, @ 2 PM EST … in other words, an excuse to
keep the meat grinder operating that guarantees shit fills & high “slippage
candy”, while at the same time allowing the scumbag bullion dealer banks the
opportunity to position themselves for the “pop” up/down when the news hits
… cuz if you think they’re “flying blind” and don’t know what the minutes
show, then I’d like to show you that beachfront property I got in Kansas.

Of course, in a sane & legit world, all government reports would be issued
Saturday morning … this way, all participants would have equal chance to
gauge their importance, and thus market moving impact … “but, we don’t live
in a legit world … we live in corruption, bribery, extortion, & graft up to our
eyeballs, and without the “skim” from financial markets the scumbag banks take
as their right, who’d pay off all the Pols, Apparatchiks, regulators, exchange
officials, & brokerage house execs paid to look “the other way”, and pretend
everything is squeaky clean”? … cuz make no mistake, today at 2 PM EST,
somebody or a group of somebody’s is gonna get fucked, and then handed
some whopping losses … losses the banks are waiting for patiently.

Noon in New York, and what a total bucket of shit we got for markets, as of
course everything is held hostage to the clueless Twits at the FED, and the
official propagandized minutes to be released at 2 PM EST … just another
day, where part of me wishes I simply shoveled shit at the circus for a living,
instead of trading … all of this just one big fucking scam, masquerading as
high finance and perpetuated by the MSM.

“We waited all day for this? … pretty pathetic reaction to the FED’s cautiousness
on future rate hikes … let’s face it shall we? … nobody at the FED has a clue
what they’re doing, and all the doublespeak financial bullshit they throw at the
wall isn’t sticking in my house … they’re clueless, and if SHTF with China & or
some other place, they got no idea what to do”.

Hopefully tomorrow sees better action than this … less than $3 in 7 hours of
trading up to the minutes report … now very little except position squaring
… overnight I think there could be some sell stops under 1335 - 36 if we can
get there … any spikes lower into New York tomorrow will offer some good
trading opportunities … we’ll see what happens then. I’m outta here … until
tomorrow mi amigos … Onward & Upward!!