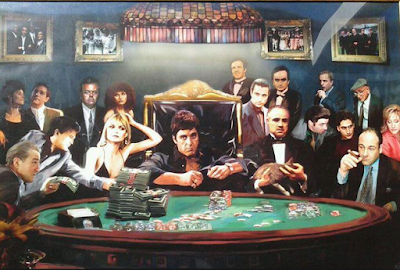 The self anointed meet yet again over the weekend … and again, the public is
fed a heaping pile of bullshit as to what it accomplished, other than wasting jet
fuel and good champagne on a group of thugs, dictators, SJW’s, and bullshit
artists, who for the most part couldn’t operate a hot dog stand at a baseball
game and turn a profit. Villainy, treachery, and general “scumbaggery” on
parade, that would bring jealous tears to the eyes of a bullion dealer.

And since the world didn’t end as a result of any of the Mafia Dons getting
stupid, it’s complete victory in financial markets … gold up about $10 after an
otherwise lackluster start to the Asian trade, as the “Chuckleheads” and Mrs.
Wantanabe & Gal Pals finally panic bought the stuff with both hands … “well,
you know what that likely means for New York, so don’t get your hopes up this
trading session has anything in it other than bullshit dealer chop … could be
wrong, we’ll see, but for the most part history in this “shitshow circus” says
otherwise when the range is above average coming into New York”. And just
when ya think Mrs. Wantanabe & Gal Pals might have bitten the dust, here
they come after the fresh checks have cleared, buying the G20 news like
chumps, so the bullion dealers can make them pay later in the day … “Oy,
some things never change”.

Sadly, though, the Clinton’s & Bush families couldn’t make it to the
“thugs & hypocrites” convention … the former hustling $11 tickets for the
2016 crying tour, and the latter planting senior somewhere … “Oh well,
there’ll be other opportunities for graft, corruption, & bribery”! Meanwhile, here
at the hacienda, the Mrs. says to me, “hey, did Hooker & blow prices go up in
Buenos Aires, as a result of this idiotic confab”? … and she’s lookin’ at me for
an answer? … and I’m supposed to know? … WTF? … and I look at the dog
for an answer and he says, “Did somebody mention bacon”? And that’s what
passed as “critical analysis” at my house … and I thought figuring out gold
was tough!

New York opens and it’s dead … so far, no volume, no liquidity, and things
look dull as dishwater … good grief … the usual gaggle of spikes up/down
going nowhere inside a tight band … already I’m weeping. And here at 15:30
server time, gold gets its first “mystery tick” of the day, as buy stops are set off
and then drops like a rock in water … so far, same old shit, different day, but
things are looking up.

And then comes the “Thelma & Louise” $3 drop on Powell not speaking before
Congress on Wednesday … it got cancelled … “oh wait, the news headline
forgot to mention Wednesday is a day of mourning for Bush 41 and markets are
closed along with Congress … whoops … nevermind … so now the longs get
wiped out on bullshit … just another day in bullion hell”.

Given the news over the weekend, I would hope gold could see something more
normal in terms of a New York range … with 2 hours to go, we got about $6,
which is frickin’ pathetic … granted, stuff could still happen, but it isn’t
looking good … the “Great Bullion Wall of Selling” is looking formidable above
1235, as bullion dealers doing everything in their power to quelch any and all
rallies … they just continue to sell 100 lot after 100 lot with borrowed FED
money until the buying dries up, longs get nervous and push price lower on
selling, where they then stand there and buy it back from you … rinse, repeat,
and you got the central trading idea from the dealer’s perspective.

This 1230 - 1240 area is extremely dangerous from a trading perspective
… longs cuz when the buying dries up it falls quickly back … shorts cuz any
move slightly higher will unleash an avalanche of buying off the daily, weekly,
and especially monthly charts, and who knows where that ends up on the
upside … I sense a very high nervousness in the trade from both sides. The net
effect, is we sit up here hour after hour between 1232 - 1234 where the bullion
dealers simply wait out the longs, knowing sooner or later they get
uncomfortable not seeing price move higher and then puke.

One algorithm buy signal trade today … PAMM up a few bucks. No trades in
the C2 options advisory signals service.

When it won’t go, it won’t go, so bail and come back later … and so far today,
most of the algorithm signals to buy have been negated due to a lack of
volatility … yea sure, we’re about $10 - $11 higher on the day, but most of that
came late in Asia and late in Europe as well … so far, New York has about a
$6 range, which is well below the 20 Day Range MA, and trading action hasn’t
been anything to write home to Mommy about, with the usual spikes up/down
from hell sprinkled in to spice things up for those who overstay their positions
… “gold almost never disappoints in that respect”! The action today has been
slightly better, but still, overall it’s disappointing given the weekend news and
moves in other markets.

The good news? … “well, after watching the usual suspects shove gold sharply
higher overnight, New York hasn’t really been able to break price … about the
same level ± $2 from where they left off, and that has to be viewed as a positive
… not much to hang your hat on, but usually New York would
“monkey hammer” price and we’d be lower for sure”. Going forward into this
week, the key for price isn’t can it go higher, the key is when it breaks what
happens next? … does it bounce back or does it sit and go sideways? … and
from those breaks, can any momentum be generated to challenge the
1235 - 1240 area and take out the massive stops above those levels?

Have a great rest of your weekend everybody!!