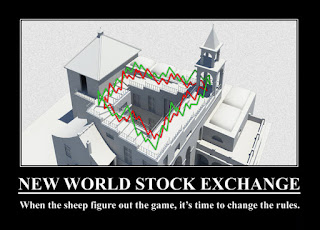 “Choose your steps carefully on this trading floor!”


In the last 10 years or so, the financial world [investments, trading, savings, etc.] has been so transformed, nobody coming back from a 20 year sleep would recognize it. Three elements are responsible for this phenomena; 1) a Federal Reserve that has absolutely destroyed savings & investment income in the traditional sense for “baby boomers” [born 1945 – 1955], 2) a totally irresponsible Federal Government [both “R’s & D’s”] that has encouraged fiscal mismanagement and now deliberately manipulates, through the Fed, practically every financial market in the world, and 3) an MSM [main stream media], both traditional and financial , that is more interested in specific political agendas than in reporting the truth. Add it all up, and the average investor doesn’t stand a chance.

And so, the question becomes, regardless of how you want to phrase it …using fancy biz school jargon or just plain main street common sense, “with what the government has done to me [and yes, it was a concerted, conscious decision by elite policy makers], how the hell do I generate a return on my money, that on the one hand gives me yield for the fruits of my labor, and on the other hand doesn’t destroy me, when interest rates are close to zero or even negative”?

As a young trader, ready to hit the trading floor many years ago, I came face-to-face with the problem, long before the general population had an inkling anything like this scenario was even possible; “I got limited capital, and I have to generate return to live and to stay out of the Pudding Business; but my top priority has to be avoiding risk and staying out of trouble, otherwise talking or thinking about any kind of return is a meaningless exercise; so how do I do that? Cuz if you put a gun to the head of every trader on the floor, and by default you got the truth, every single one of them had as their biggest fear in life, going broke and having to work … ughhhh … Oh, the humanity! … and it was a very big motivating factor to not do ‘stupid poo poo’ each and every day”.

So, whether you like it or not; whether you are young or old, have cash flow or savings in the bank, working … near retirement … or retired, “you’re all IN MY WORLD NOW, in the sense that you are facing the exact same problem I faced years ago… the circumstances are different, but the needs are the same; generating alpha while courting low beta! Cuz we all want that perfect world of high returns with low risk; and getting into that universe is tricky business indeed”.

In its most basic and simple form, this is the conceptualization of the “free trade”; of course, nothing is really free in trading, but for my purposes it has to be viewed by objective inside my trading premise. Simply put, you get in a trade and it becomes profitable quickly; compared to where your starting capital for the day started, you now have “free (unrealized as yet) money” cuz in your mind you’re playing with “house” money since it’s all profit. At this point you can let the market play some and see if it continues to go in your direction; if it does, you’ll end up a very big winner, all the while practically eliminating risk to your day’s starting capital because it was a winner to begin with. In essence, viewed this way, you got something for nothing.

Of course, there will be plenty of times when you scalp a trade and 10 seconds later it goes bananas and would have made 3-10 times what the scalp got you; or, you hang on and a decent scalp turns into a very small profit or scratch trade for zip. It happens … deal with it and move on to the next opportunity. Point is, there are no big losses in this equation, and as we all know from the “earnings projection” table I put up now and then, it doesn’t take much to get you to your “escape to success” story when you can avoid large losses.

What all this means is that I actively seek, through the algorithm, the lowest [most beautiful] probabilistic beta I can find; and that’s the scenario [premise] of the entry via the scalper’s algorithm. It simply gives me the highest probability of success of being up in the position quickly; from there, it’s all downhill cuz I hold all the cards. If I consistently put you in a profitable position the vast majority of the time [70/30 – 80/20], you can be the world’s worst trader liquidating [scalping or using the “free trade” concept] and still … still … make a fortune. Since no trader on earth is even close to being perfect, in my world this is as good as it gets.


Turning to today’s trading … starting the day off with some slight weakness in gold … notice, the Chuckleheads in Asia aren’t wildly bidding it up at night now are they? … Outside of one night in the last week, they have been [relatively speaking] very quiet … make no mistake, this is bullish for gold prices. Wherever this current move eventually takes us, here on the upside, if gold holds to its usual historical pattern we need to see a “blow off” day on the upside where prices finish at least $7 - $10+ off the highs of the day on heavy volume in a short amount of time [like 15 – 20 minutes]; until then we are apt to see a continued, slow, steady climb until the market forces out short sellers in some kind of mini panic stampede.

A couple of hours into this [so far] “grass growing” session with the following 2 trades directly below.

This first trade is obvious enough, but I want to focus on the 2nd one a bit; it’s clear the buy signal was initiated when it was, but going into the sixth minute I’m not up anything of significance. This concerns me, as normally this is too much time to waste without any buying power from the market to confirm the up move; when price stalled and started backing off I liquidated, and the entire trade wasn’t ± 5 cents either way, so it’s just a scratch … simply move on.

Ok, now is where the fun for the day starts … below a series of trades via algorithm rules on the same chart for conciseness; 3 trades in total.

Thought about hanging on to that third trade, but ultimately took the money on the green M1 turnaround … no worries, like I said above. The key on all 3 of these trades? It’s basically a winner from the get go of the initiation of the trade signal. Now, you’re either the pigeon or the statute with a tarp on … more than likely the trade now can’t hurt you because you aren’t ever going to let a winner turn into a loser … right?

If you take the time to think about it, my 2 scratches wouldn’t have been possible without 3 things; 1) a very tight spread [$0.08 - $0.15], 2) RT commission of 2.4 cents per OZ., and 3) no significant slippage on liquidation. At a lot of other places, this wouldn’t be possible. Not that it will “work out” like this every time, on every day, with every trade, but I like my chances.

For those of you who need it, below is the link for the Turnkey Forex MT4 trading platform. I’m outta here … beach beckons … until tomorrow.