THE STATE OF THE GOLD MARKET 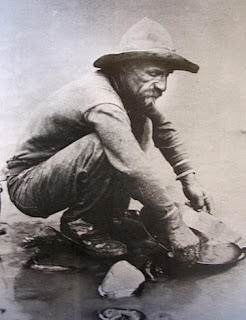 “Hey Dutch, you got a bid/offer on spot gold?”
I remember the time period very well; it was the Fall of 1980, and I’m standing smack dab in the middle of the world’s largest gold futures pit. It’s September, and the first event up is the assassination of Egypt’s President Anwar Sadat; gold skyrockets up into the mid 700’s. By October, it’s very clear to the “talking heads” and of course the expert political pundits that Carter was a “slam dunk” in the upcoming presidential election over the cowboy, renegade, clownish, lead us into WWIII with the Ruskies, B-grade actor who made a movie with a frickin’ chimp, “how could anybody vote for this fucking clown” Ronald Reagan. The last public poll taken 2 weeks before the election showed Carter with a 9 point lead, and “talking heads” were whispering landslide.
“Oh, you’re gonna get your landslide alright! Hahahaha!”
I will never ever forget watching NBC the night of the election; John Chancellor and David Brinkley, two of the biggest mainstream TV journalists [aka “Democrats with by-lines”] who absolutely couldn’t believe what they were seeing, slowly accepting the inevitable that Reagan was going to win and win “bigly”. “Holy cow David, we just got an update on returns from Florida, and Reagan has taken a very big lead; Ummm, could somebody check those returns with election central and make sure they are right? I don’t want our audience to think maybe something is ‘happening’ when in fact it isn’t.”
“Ok David, I don’t mean to interrupt you here, but we have an update from Florida; yes, the last results were in error … wait … what? … Reagan’s lead is actually bigger than first reported?”
Absolute “comedy gold” that night as every single MSM asshat [just like now] first goes through anger, then denial, then reluctant acceptance.
At first, gold rallied on Reagan’s win, figuring this guy will kill the world, or at the very least turn it “upside down” and be very good for gold prices. What turned out of course, is starting in 1981 gold worked lower and crashed in late 1982, and never recovered much for the next approximately 20 years. We went from $20+ ranges on the trading floor, to a day in 1981 where after a $1.80 range for the day, I walked out of that pit and never returned. And until the start of the 21rst century, I don’t think during that 20 years it ever had a day with a range over $10; it probably did, but it would be a rare event and I have no memory of it.
Fast forward to today, and the parallels to Trump’s win on 11/8 is scary similar; 1) we have a MSM press that is “150%” totally in the tank as Libtard Nation for Democrats, 2) the anger, denial, acceptance is working its way through the process as before, 3) the conventional wisdom [what an oxymoron here] says Trump is going to “kill the world”, and most importantly for us 4) gold is proceeding much faster down than I thought possible.
All of which brings me to ask the $64,000 question; “Is history repeating itself, and does this forebode much lower gold prices, and more importantly, are we staring at a multi-year bear market that sees not only lower prices but very small ranges for trading?” There are “wild cards” on the proverbial table we didn’t have back then; 1) world debt almost infinitely higher at negative interest rates, 2) the rise of China and the continuing collapse of the Yuan, and 3) world economies on the brink of total collapse. All of which, by the way, is supportive of gold.
As you all know, I’m a trader NOT an analyst; hell, I’d trade “black dirt futures” if there was a market in it that had good intraday volatility and liquidity. But I’m also a “realist”, and I don’t just sit around and become unaware of the trading environment and trading paradigms that are unfolding or developing around the world either. As the Mrs. so aptly states, “trade whatever the hell you want; just remember, I got needs!”
And so it goes, nothing ever really changes as the decades flow by and “shit happens”; and in this flowing of time, gold “ebbs & flows” with it. My thoughts are I have to be prepared to give you markets to trade with the appropriate volatility algorithms so we don’t have to sit here and watch history repeat with our pants down.
Turning to gold today … “see my shocked face the Chuckleheads bid gold higher in Asia right out of the gate last night.”… right now, near the open in gold, the Yen is finally showing some strength after getting clobbered the last few weeks, and this should provide support for gold today if it can hold the gains.
Well, that didn’t take long; first trade of the day [and most likely the last trade of the day as this is Thanksgiving week in the U.S.] directly below.

Even though market is above the white line, when gold runs out of steam, I’m not hanging around in a long position to find out what happens later; “hope & change” is great for Libtards listening to professional asshats like Chalky Soetero, but it most definitely isn’t a viable trading strategy. Little over a buck in this puppy for the effort, and it does you no good to try and “wish it” higher. Until we see the SP500 break, you aren’t going to see gold op up more than a couple of bucks because the rallies can’t be sustained. And until they can be sustained, you have to have “situational awareness” and realize, that until it happens, it’s not happening now so don’t hang on to long positions and expect the overall market trend to bail you out if you fuck up.
Here at the New York Noon hour, gold is in one of its “glacier moves” lower; i.e. constant commercial selling eating away at buy orders, and until either/both USDJPY or SP500 breaks, the chances of a good day rally in gold is “Slim to None” and Slim is on vacation. Not interested in trading gold the rest of the day cuz I don’t see good probabilities of anything happening.
Over the weekend, I spent a lot of time on the stock indices manual, and I’m making good progress, but I’m not finished; there’s a lot to do there with 6 markets [DOW30. SP500, NASDAQ100, RUSSELL2000, GOOGLE, & AMAZON], and it’s a big project, especially when you consider all of the exhaustion charts I have to go through. So, have patience and it will be here soon.
The dog looks antsy, so I know it’s time to hit the beach for some Vitamin C therapy … we’re soooooooo outta here. Until tomorrow …
Have a great day everybody!
-vegas
OPEN A DEMO AND/OR LIVE ACCOUNT AT THE LMFX LINK IN THE “DOWNLOAD LINKS” SECTION OF THE WEBSITE TITLED “OPEN TRADING ACCOUNT – DO IT NOW!”