MOTHER OF ALL INTEREST RATE MEETINGS 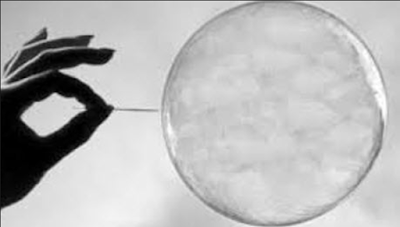 “When do they burst the GBPUSD rate increase bubble?”

Well, tomorrow sees the BOE have one of their more “delicate” interest rate
meetings in some time … and the ramifications going forward should be
interesting to see. My best guesstimate, is that they spin the “bat guano” out of
the current slowdown, do not raise rates, talk about inflation moderating some
but need to stay vigilant, and basically put the lipstick on the pig known as the
British economy, and tell everybody downside risks are moderate, and interest
rate increases will be coming shortly and be data dependent … in other words,
pure bullshit to placate the masses and keep everybody from panicking over
not only May’s incompetent government, but an economy that more than likely
is already in recession.

I’m sure Carney would love to see a lower GBPUSD, cuz every clueless central
banker Twit in the world is convinced a lower exchange rate means greater
exports … all I got to say about that is 1) Venezuela, and 2) higher domestic
inflation. But try as he might, I don’t think he’s gonna be able to keep things
calm in the aftermath of their meeting and subsequent presser on inflation.
And while Cable may jerk lower when they announce no rate increase, I’m not
so sure it stays there … these last 5 days of trading have been a nightmare to
capture, especially on the short side, as whenever it drops, it turns around with
a vengeance and literally screams higher … straight up, and straight down,
with almost nothing in between, cuz as I pointed out yesterday, when it
corrects from any of the straight moves, that’s it for the day … mission
accomplished, see ya tomorrow. And that M.O. has “bottoming” written all
over it.

We’ll see of course, but as today’s 35 minute “blitzkrieg” out of nowhere
showed yet again, after bolting 100 PIPS from the bottom on vapors before
rolling over and losing half of that the rest of the day, it doesn’t take much to
get this thing moving like a freight train without brakes, down the mountain
before they clean out one side or the other from the order books … and the last
5 days have seen plenty of “cleaning” … again, that has “bottoming” written all
over it.

Turning to today’s GBPUSD market … once again, it’s plain for every trader to
see, and that is how Cable trades; which is violently and quickly to one side, and
then nothing the rest of the day. I didn’t really expect this kind of rally today,
given tomorrow’s interest rate decision. In fact, one of the main reasons I had
the Cable analysis done by Cousin It over this last weekend into Monday, was I
thought Monday, Tuesday, and today would be “choppy”, trendless, and
relatively low range days for me to concentrate on studying the algorithm
signal & directional generators in the least favorable environment we can get
… which is of course, “chop” … and while we got some, we also got a
surprising good dose of a couple of “pony rides”, while I’m standing at the gate
wondering, “WTF was that”? And while we did end up breaching a down trend
line in the HR4, from the April 17 top, this market breaks trend lines all the
“Hoover Dam” time, and we don’t see 100 PIP rallies from that … what makes
this one “special”?

To say I’m surprised by it is an understatement … and while I’m sitting here
waiting for even the slightest pullback from 1.35400+, it’s “not on your life
Skippy, this is going to the top”, where then it’s all over but the shouting and
screaming. Welcome to another day of trading Cable.

Only one short trade today … PAMM up a couple of bucks, nothing significant
to show for the effort.
Directly below, today’s M5 with the Cable algorithm overlay.

After trying to move lower and that failed quickly, it made 4 attempts to go
higher and those failed … after approximately 4 hours of watching every move
fail, and seeing the plum and yellow lines basically go flat, what makes the 5th
attempt “special”, the day before the central bank meeting on interest rates?
Puzzling to say the least. No doubt, though, tomorrow is going to see some
interesting moves … we’ll see what happens.

A quick word about crude oil, since yesterday saw first, the “fake news” from
CNN [who else?] reporting President Trump stays in the “Iran Deal”, then he
announces a little bit later the U.S. is out of the deal, and then this morning we
get the usual Wednesday 10:30 EST. API [American Petroleum Institute]
inventory numbers out of Cushing, OK., the main storage for WTI crude oil,
along with other oil distillates. And of course, when market moving news is
either about to it, is hitting, or came out a few minutes ago, the LP’s in crude oil
will “jack” the spreads to levels, where you simply just have to leave the market
alone. And it wasn’t until around Noon time in New York, that the CFD’s got
back to a 4 cent spread, and U.K. Brent has been at a 5 cent spread all day long
since the API numbers, and before that was trading with a 7 - 8 cent spread.
Who the hell is going to trade any of this with spreads like that?

Sorry, but what they are asking is akin to trading GBPUSD all day long with an
8 PIP spread, plus RT commissions. “Sure, tell me again about how “deeeeep”
the liquidity is with these “so called” tier one level banks, and how we are getting
the very best bids and offers in the entire industry … yea right … well, I may have
been born at night, but it wasn’t last night, and while front month futures were
trading with a 1 penny spread, our cash market WTI is at 6 cents, and the Brent is
at 8 cents … give me a frickin’ break”.

Directly below, the M5 for today in WTI crude oil.

And lo & behold, now at approximately 2:30 - 3:00 EST, as the market is
winding down for the day, the LP’s decide to lower the spread to 3 cents … as
you can see from the M5 above, the entire range for the day from the European
open to now has been about 55 cents … not exactly a “barn burner” in the
scheme of things, and also that at the API numbers, there was a little
excitement, but not much … “so, this gives you license to attempt to gouge the
shit out of me by offering me a spread that is over 10% of the entire range for the
day? … on top of this, I gotta pay commissions as well, so my question to Turnkey
today was, “why even offer this shit if this is what they do?”, and of course their
response is, “we have the best LP’s in the biz”, to which I don’t know whether to
laugh or f-ing cry”.

As I told them this morning, “go ahead and raise the spread in EURUSD and/or
USDJPY to 5 PIPS, and leave it there … let me know how many customers trade it
today? … you’re frickin’ idiots if you think people don’t notice this shit, and
what’s worse, they get into a crude position, and it starts to go against them, and
the LP raises the spread from 3 cents to 8 cents … now that would piss me off to
no end, and yet you sit there and act like this is totally acceptable, and then have
staff meetings and wonder aloud why you can’t get more potential
customers/clients to open accounts … duh”?

So yea, while the crude oil CFD’s are on my “radar”, they aren’t there yet in
terms of stable pricing for us to trade yet … I’m gonna watch them for as long
as it takes, and until I’m satisfied they’re “legit”, I’m not handing money to LP
banks for the privilege of trading … screw that … in the meantime, I’ll simply
trade the front month futures with the oil algo in my personal account, when
appropriate, and not worry about it. Bottom line is, all the damn banks care
about is money, and up and until they sit up and notice that nobody is trading
their shit products cuz they’re priced so horribly even a blind, retarded kitten
wouldn’t touch them, they won’t change anything … and yes, they think we are
that damn stupid. Cuz I know management is relaying my comments to the LP
… question is, do they give a crap?

I thought I’d be spending the day analyzing the Cable algorithm improvements
in real time … instead, while I got a little of that, another “pony ride” down the
drain, in what is becoming frustration madness beyond belief. I do think,
though, that the improvements to the Cable algorithm give us some precious
time [seconds to maybe a minute or two, tops] to get into a position before it
explodes, so that we don’t have to buy/sell “in the hole” to get in … I will say
again, my biggest concern is “chop”, and not falling into a trap of trading 7
times and getting my fingers sliced up, and then needing the 8th trade to go 30
PIPS to break even, and the time I spent today seeing the algorithm
improvements in real time, was time well spent in that regard.

Tomorrow should be a monster day, range wise, and I would be shocked if
there isn’t at least one “pony ride” available to us after the news hits … we’ll
see what happens … I’m outta here … until tomorrow mi amigos
… Onward & Upward!!