WHEN THERE IS NO EXIT STRATEGY 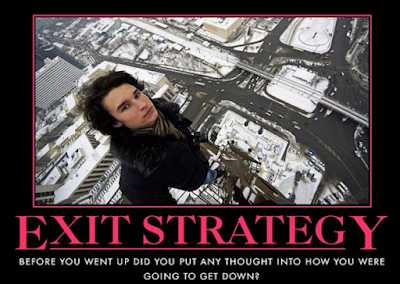 “What could possibly go wrong?”

Surveying the charred remains of the stock indices financial battlefield,
round up the usual suspects and pick from the list; first the usual retail
specs who gambled everything on short VIX, then the institutional ETN’s
& ETF’s that went belly up, and finally sprinkle in some hedge fund quant
genius’s who’ve never seen a selloff that can’t possibly happen in a million
years, yet somehow happened in the last 5 days … what do they all have in
common? “They had [as in past tense] no exit strategy in case SHTF … and
when you’re managing hundreds of millions or billions of dollars in a crowded
field of like minded idiots, did the question of “how the hell do I get out of
trouble if it comes”, never seems to raise it’s hand and ask permission to speak
… morons, no other way to put it”.

And it never ceases to amaze me, after the fact, how all of them can now see
the “flaw” in their respective trading models … “umm, yea, where were these
thoughts before you stepped in the flaming bag of bat guano”?

The red warning flags were there for all to see … hell, in the history of the
world, what market goes up parabolically forever? … try none. Yet, with
every yardstick of measurement that you can dream up, including record
short interest from the spec community in VIX futures and options, eyes wide
open fail to see. How many months ago was it that Zero Hedge [ZH] had the
article about the Target manager who quit his job cuz he was killing the VIX
futures by selling it, also selling call options for premium, and then waiting to
pocket the cash? “Sure, this is gonna work out just fine … like Mrs. Wantanabe
in Asia … like housewives in Canada day trading crude oil futures when oil was
up at $115 / bbl. … like Bitcoin @ $18,000, for sure on it’s way to $100K “no
problemo”, but let’s stop down at $7,000 first, so others can go bankrupt also
when it goes to $0 [maybe, who knows] … and where oh where, for all of these
people, is the “exit strategy” in case SHTF”?

The problem, in a nutshell, is none of these folks, institutional quants included,
understand how to trade nor do they understand the proper “setups” for
markets going higher and for markets going lower … they’re not symmetrical
… there’s a different dynamic to each. Instead, they buy a “story”, and that
“story” glazes their brains and eyes to reality, and eventually the exit strategy
they embrace is they’ve run out of money. “Nothing says it’s over more than a
zero balance in your account”. And when SHTF, they ignore the first small
losses, cuz the “story” tells them the market is wrong and they are right
… the bottom comes when they all puke. Welcome to financial markets.

Turning to today’s trading … “well, that escalated to the downside quickly,
didn’t it”? … both Cable & EURUSD getting “monkey hammered” today,
slicing through supposed support levels like a chainsaw through soft butter
… “but … but… but support”. Today saw EURUSD go below the 1.23500 level
for the fourth time … how many knocks at the door do you think you get?
I made one trade today … after the initial low in EURUSD below 1.23400, the
market attempted to rally … you don’t need to be a rocket scientist or brain
surgeon to see this is the 4th attempt to go lower in the last week under 1.23500
… if it holds and rallies, fine … if it doesn’t, there’s potential sell stop trouble
below.

I got long at a pretty decent point, and at the time 10YR. German Bunds were
going lower [price goes lower, yields go higher] … and they kept going lower,
but EURUSD couldn’t rally; this is a warning flag. And when price did
eventually pop its weak head above my entry point, I didn’t hesitate to
liquidate cuz somethings wrong here … we should be higher but aren’t, and
that usually means trouble … after I got out, price went about 4 - 5 PIPS
higher and then the avalanche lower started … and when price took out the
previous low, I wanted no part of being long down here on this 4th trip … way
too much risk on the downside. For me to get long again, price has to get
above 1.23550 and start the process of rallying back to the high, first taking
out the 50% retracement level, and then giving me some kind of break in price
to get long. I’m simply not willing to get blindsided with sell stops if EURUSD
continues to move lower.

The one trade yielded a small profit for the PAMM, but nothing of substance
other than nominal yield below 0.1%.

As the trade continued, there were other opportunities for some scalp trades,
but I passed on them cuz the rallies up to now are very small, and the down
spikes larger … one wrong move here, and it won’t be easy to recover if at all.
The market feels heavy, and looks to have trapped many long position holders
above 1.23000 … as the day wears on, where and when does the panic start to
get out? And in that process, I don’t want the company on any long trade.
EASY PEEZEE, I’ll just step aside for now thanks.

Word is coming out now of “strong talk” from some ECB members of accusing
the U.S. of “manipulating” its currency lower; this is the “talking heads” reason
du jour for the lower EURUSD … no matter, the setups are all wrong for being
long in the New York afternoon, sharply lower, traders trapped, and to boot in
a week that needs “profit taking” [thank you CNBC’s Bob Pisani]. Notice,
though, this news hits as EURUSD is going lower anyway from long liquidation
from the trade … “Gee, who could ever have predicted this from central bankers,
that “jawbone” once the selling starts to make it worse”? If they did this a week
ago, nobody would have paid any attention to it. “Oh boy, this mauling in the
New York afternoon is really hurting some longs … down to 1.22460 as I write,
after an intraday high above 1.24000 … ouch … and if anybody got “stupid” and
attempted to double or triple up losers cuz of “support” … double ouch”!

This is one of these kinds of days in trading that is impossible to predict
… from my perspective, I knew the market was in trouble when it couldn’t
stay above 1.23400 … that doesn’t mean to start taking short positions, it
simply means the “mechanics & dynamics” of the trade in EURUSD, from a
“setup” standpoint or perspective,  don’t support the market thrusting higher,
and given the fact the market is “tired” anyway, the potential for trouble from
the long side is greater than it was in previous days.

Bottom line, though, is we’re up money on the day … I’m sure there are some
folks who would be very happy to trade places with us … We’ll see what
tomorrow brings … I’m outta here … Onward & Upward!!

UPDATE: “Ghost in the machine”! … How this happened I don’t know, but
in closing the trading platform on my laptop, somehow … some way … I
traded 0.05 lots of GBPUSD. Just before I logged out of the PAMM master
account, I hear the sound for a fill, and when I looked in “Terminal” on the
MT4, I see I’m long 0.05 GBPUSD. So natch, I close it out quickly, and we
get dinged a little over a buck. Now, I don’t know if everybody in the PAMM
will get allocated this FUBAR trade, cuz it’s so small. I’m treating it simply
as a “trade adjustment” in the PAMM. So, if you’re in the PAMM and don’t
see it, don’t be surprised, cuz I have no idea how the “HAL9000” computer
system at the LP will treat it and allocate it. Just wanted everybody to know
what the PAMM Spreadsheet adjustment is for and why it’s there.

OUR TURNKEY FOREX “PAMM/MAM” IS NOW OPEN AND

OPERATIONAL; SEE “PAMM/MAM MONEY PROGRAM” IN
“DOWNLOAD LINKS” SECTION IN RIGHT HAND COLUMN
FOR DETAILS [VIEW ONLINE AND/OR DOWNLOAD] AND
START YOUR JOURNEY FROM WHERE YOU ARE AT TO
“ESCAPE TO SUCCESS”!