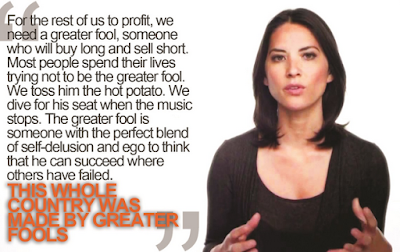 “I don’t know about the whole country … financial trading definitely!”

When it comes to understanding financial trading, you better have a firm
grasp on the “greater fool” theory, and the dirty little secret is that the bigger
your trading is relative to the market you’re trading, the earlier you must be
in terms of liquidating a position … not necessarily in entry, although it helps
there also. In FX, none of you have to worry about being “too big” … 10
million notional trades are nothing … 100 million notional trades and you can
start the process of worrying, and I’m quite sure none of you are there.

Fact is, nobody in the history of the world can 100% consistently pick short,
medium, or long term tops & bottoms; that’s the bad news … the good news?
… we don’t have to be perfect, just close enough to a turn to position for profit;
then, we let others panic and take advantage of them … “it’s simple, but it ain’t
easy” … cuz what you need are discipline and patience, and most importantly,
“the ability to let somebody else take the position from you before it finishes its
run; this way you get the best fills … and then not caring what happens next, but
move on to the next setup”! It’s the way successful trading has always been and
will always be, given the assumption that central bank manipulation is little to
nowhere to be found among non-correlated FX pairs. And the reason I can say
this, is cuz I know human psychology in the collective aggregate never changes
… people are people and human first, and whether you’re trading rice
warehouse receipts 3,000 years ago in China with Sokyu Honma, trading tulip
bulbs with the Dutch from 1634 - 1637 [when that market crashed], NASDAQ
stocks in the 1990’s, or today in FX, “fear & greed are always in play … the only
thing that changes are the names”!

The other part of the “greater fool” theory, I used to hear a lot about but don’t
much anymore, but nonetheless is still around is the following: “nobody ever
got rich scalping financial markets … it’s a sucker’s game … you need to be like
Uncle Warren and invest “long term” … [sure you do; who’s the sucker now?]
… it’s all random walk anyway, so you have no chance getting rich doing this”.
Well, I’ve proven this is bullshit 6 ways from Sunday, and have never given it
any credence … ever. The fact is, the math will take you there if you bother to
look at it.

The $64,000 question, though, is how do you want to define “rich”? Is it “net
worth” [assets - liabilities], or is it “cash flow” [money taken in - money for
living expenses]? I grew up in Northern Illinois, and I can tell you, most
farming folks who were rich in terms of “net worth”, couldn’t afford to eat out
once a month at Chili’s cuz they had no cash flow … in my book, “net worth”
doesn’t mean much unless it’s highly liquid; of course, I’d like my “net worth”
to increase over time, but my “lifestyle” and the way I live are far more
important than some fuzzy goal years or decades from now, or what some
snob in Forbes magazine says is “rich”.

Let’s look at one possible hypothetical out of many; who reading this right now
wants an extra $1,000 per week in income? … raise your hand … “hmm, that’s
a lot of hands I’m seeing” … Ok, how do you get it from trading; either from
the PAMM or DIY without insane risk, and in fact very low risk? … Do you
think it will take an extraordinarily “long time”? And while you’re thinking
about what an extra $1k per week would do for your life, either single or as a
family, would it in fact make a material difference? I’m guessing for most, the
answer is a resounding “yes”, and if not, just adjust the numbers some to make
it material for you … if not $1K, how about $2K or $3K per week more?
Consider the pic directly below.

Here is the website URL for the “Future Value” Calculator:
http://www.calculator.net/future-value-calculator.html

Now, given the paradigm of today’s markets, which I stated in an earlier blog
post aren’t anywhere near as volatile as years past, thank you very much
central banks, without “walking the plank” in terms of risk, pretty much
everybody that trades has been forced to adjust … not just me, but every
hedge fund, CTA, and bank on the planet can’t expect returns like
yesteryear; fact is, the world’s central banks simply won’t let markets run
100% free and do whatever the hell they want … and truth be revealed, FX
is the only place where central bank manipulation is the “least” among
markets, giving us our best returns for trading.

The above calculations assume a 0.2% return per day; some days more and
some a little less, but let’s just assume an average of 0.2% … a very realistic
and modest approach that many times can be exceeded without undue risk or
overnight and weekend exposure … the key is not to get “whacked” and do
“stupid shit” like lose 10%+ in a day that sets you back more than a month
… most hedge funds, CTA’s and their pools, and options hedge funds seem to
forget this. If you lose 50% of the value of an account, you got to make 100%
on what’s left to get back to even!

My point here is simple: “anybody reading this can get the “trader lifestyle” via
either the PAMM or DIY with minimum investment on your part; you just got to
do it … it ain’t gonna happen by itself, you have to make the commitment to do it.
Can you start any kind of legitimate “bricks & mortar business” with as little
funds, as in the above example, and expect a return like this in less time than one
of your kids goes from high school through college?” Anybody over the age of
30 remembers 5 or 6 years ago like it was last week … and it could be
significantly shorter if volatility picks up some; it wouldn’t take much to
significantly shorten the time period for $1K per week.

My objective today, is to “FORCE you to see” what’s possible for YOU
… that’s why I included the URL for the “Future Value” Calculator; you can
play with this and tailor make a plan for you. Hell, on this website, over in the
“Download Links” section in the right-hand column is everything you need to
get started if you haven’t already. The 2 Algorithm’s, “The Scalper’s
Algorithm: The Final Solution” and “The Teacup Handle Turn”, taken together
will cover any market condition EURUSD finds itself in, including the “Flying
Wedge of Death” [FWD] in all its manifestations and variations, and “doji”
days to some extent, and put you in a profitable position over 95% of the time
you trade. “So, do something”!!

Turning to today’s market … Chuckleheads in Asia bid EURUSD to the then
high for the day at the European open, and then Europe takes EURUSD
higher … what’s wrong with this picture? Well, a lot, but the algorithm isolates
some long trades, and more importantly, EURUSD is “attracted” to last week’s
high at the 1.23510 level like bugs to a porch light in Summer … you just know
the scumbag LP banks and their large hedge fund buds are looking for buy
stops to take the other side and both liquidate earlier longs and maybe even
getting short … and of course, they shove it through 51 like a chainsaw
through soft butter, and then it’s straight down. “Gee, must be just a
coincidence, right”?

The early support for this EURUSD rally came from falling 10 YR. Treasury
yields and slightly higher yields in the 10 YR. Bund … but on the horizon next
Sunday are the Italian general elections, and that political risk to the E.U. is
more than problematic, and it most definitely will cap any serious rally
attempts this week in EURUSD … that doesn’t mean it automatically goes
lower, it just means you got to have a quick trigger finger on liquidations when
it rallies … you might not get a second chance.

Two trades today, both winners … PAMM up slightly more than 0/1% on the
day.

Market really showing poor internals … the first 2 hours of the European
trade were active and displayed decent trade dynamics, but as soon as the high
of the day was hit about 2 hours in, it’s like somebody “turned the light switch
off”, and the market just started a long descent to the lows of the day hours
later … talk about “choppy”, man this downside move was it … looking at the
M1, like 4 steps down and 3 up, all the way from high to low … and of course,
hitting a new low by 2 PIPS and then rallying straight up 30+ PIPS and
screwing both longs and shorts within minutes of each other. “Gee, I guess it’s
just a coincidence, right”?

Once price gets below the 50% retracement line at the 1.23170 level, I don’t
want to get long unless price can take out the low of the day and gap sell stops
lower … at that point I’ll take a long position on the proper formation. Before
that, though, getting long is dangerous, cuz the down spikes can take out
support quickly, and if you’re forced out, you get to sell on a down move
making yourself your own worst enemy … no thanks.

I would have liked to seen a better trade today, not just the first 2 hours … now
that we’re in the New York afternoon, it’s a complete “coin flip” for price action
… and again, EURUSD finds itself trading right around the 1.22900 - 1.23100
level, where it’s been comfortable being the last several days … really, there
isn’t any momentum either direction for price at this juncture, and so you leave
it the hell alone and come back when there is … simple as that.

Tomorrow sees EU business confidence at 5:00 EST, and German inflation
numbers @ 8:00 EST. Unless either is way off consensus, whatever effect will
most likely be minor. U.S. sees durable goods orders @8:30 EST, and again, will
most likely have little effect on EURUSD … so, the immediate horizon looks like
it’s setting up for chop … that most likely means some kind of FWD, and I’ll
trade it accordingly.

For a Monday, and the fact this week is most likely gonna be a complete “dud”
in terms of range, given the 800 lb. gorilla is waiting in the wings in Italy come
Sunday, I can’t be all that upset with today’s action. We’ll see what tomorrow
brings, cuz I got no desire to get potentially chopped up in a useless New York
afternoon … I’m outta here … until tomorrow mi amigos
… Onward & Upward!!