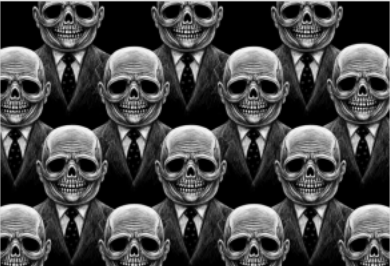 “This just in … your bullion bank LP group photo!”

Well, it’s back to normal in the world’s deadest market next to dry milk
spreads … seems Mrs. Wantanabe found some money under the couch
cushions, and proceeded to ramp gold higher at the Asian open, but since then
it’s been the usual “Comex Con Game” on display as we start the week.

New York trading action so bad, even the M1’s can’t stay near the close from
one M1 to the other without some dealer gap in price to mess with somebody
… not really a surprise to me, since today sees us wait for the next installment
of the China tariff news … a bigger “hustle” I don’t think I’ve seen in trading
since “Brexit”.

Trading action back to terrible, as gap moves in bid/offer spreads continue
unabated, price movement wholly dependent on SP500 futures moves, which
at some point will stop and kill retail specs … again! … and the now usual
spread Vito Corleone would have if he were in the offshore brokerage biz,
while telling you you’re getting the best deal in the world [cough, bullshit,
cough] … add it all up, and it’s the same old bullshit, different day syndrome
… nothing to see here Sheeple … move along now.

In other words, “there’s no “here” here” … not much else to say, as all the
adjectives I’ve used to describe this shitbox of a market, I’ve already used
about 10,000 times … “I’ll trade it if it moves, but when it doesn’t, you simply
have to leave it alone or the scumbag bullion dealers will take your money”.

Until tomorrow mi amigos, I can’t take another second of watching this crap
… Onward & Upward!!